Above are the scans for a WWII KC era Cap and collar badge set of 3 pieces for the Royal Canadian Armored Corps. Comes with all original lug type attachments in good order.  A nice white metal cap badge in excellent condition.

For Canadian funds use our credit card payment service over the phone: 1-403-262-2397 (noon to 5:00pm Tuesday through Saturday - mountain time!) or by email at creidm@gmail.com .

We also accept PayPal (US funds only); click the link above. You must assume responsibility for loss in shipping if you decline our tracking / insurance offer.

I will happily combine items to save shipping costs if you purchase other items as well... On all our products we accept prepaid authorized returns within 14 days of shipping, for full product credit, if you are not pleased.

Originally formed as the Canadian Cavalry Corps in 1910, Canada's first tank units were not raised until late in 1918. Initially these units were considered to be part of the Machine Gun Corps and the 1st Canadian Tank Battalion, 2nd Canadian Tank Battalion and the 3e Battalion de chars d'assaut were all too late to join the fighting in the First World War. However, the 1st Canadian Tank Battalion was still training in Mark V tanks in the U.K. when the Canadian Tank Corps was finally authorized two days after the armistice. It seems like tanks were forgotten by the Cavalry after the war. Although, in the 1930's there were some small attempts at mechanization with motorcycles, experimental armoured cars and the purchase of a few tracked Carden-Loyd machine gun carriers for training. The first tanks since the First World War did not arrive until a few machine gun armed Vickers Mark VI light tanks appeared in 1938, just one year before Canada went to war with Germany again. From these modest beginnings the modern Canadian Armoured Corps began on 13 August 1940 with Major-General (then Colonel) F. F. Worthington as its first colonel-commandant. Over the course of the war from 1939 to 1944, the Armoured Corps gradually took over responsibilities from other Corps, such as Tank Regiments all being converted to Armoured Regiments, the transition of infantry reconnaissance battalions to the Armoured Corps, as well as anti-armour responsibilities from the Artillery Corps. Towards the close of the Second World War, the Corps was subsequently bestowed the honor of the 'Royal' designation by King George VI in 1945. In the beginning its equipment was 219 US M1917 tanks a First World War design obtained at scrap prices. They were sufficient for some training and familiarization, but otherwise of very limited combat use. To form the 1st Army Tank Brigade, Valentine tanks were ordered. This British design was to be built in Canada. Aside from the necessary adjustments to the design to incorporate local engineering standards and available components, the Canadian Valentines used a GMC engine. This engine, being an improvement over the original, was later applied to British production. In practice, Canada never used most of the 1,400 Valentines they built as they were supplied under lend-lease to the Soviet Union. In early 1941 the 1st Tank Brigade was sent to Britain and equipped with the Matilda infantry tank. For the formation of two armoured divisions it was expected that 1,200 of these cavalry tanks were needed. The United Kingdom was not in a position to supply them, as it had shortfalls in supply for its own needs. This meant that Canada had to develop its own production. To this end a tank arsenal was set up under the management of a subsidiary of a US firm engaged in tank production in order to build the Ram and Grizzly tanks and their variants at Canada Car plants near Montreal. 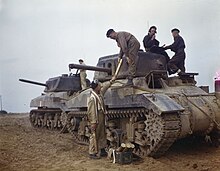 Events of the Second World War would thrust Canada into large scale tank production with thousands of Valentine, Ram, and Grizzly (Sherman) tanks and their armoured variants being produced. Canada would also go on to build modern armoured fighting vehicles that served during the Cold War, the War in Afghanistan and global peacekeeping operations. The Canadian armoured regiments split their heritage between two primary sources. The first being the cavalry corps, from which many armoured regiments were created and in fact the first "armoured" regiments were titled "mechanized cavalry" regiments, and the second being the tank corps (which formerly belonged to first the infantry and then the machine gun corps). This began in 1936 with the creation of tank battalions and continued on from 1940 when many other types of regiment were mobilized as armoured units for the Second World War. In 1968, with the unification of the Canadian Army into the Canadian Armed Forces, the name of the Royal Canadian Armor Corps was changed to simply the Armor Branch. Despite the change however, the Corps continued to use its traditional title. In 2003, Canada planned to replace all its tanks with lightweight Mobile Gun Systems. In 2007, due to experience gained during Afghanistan, Leopard tanks were purchased. As of April 2013, the traditional designation of the Royal Canadian Armoured Corps has been restored for official use.